To Natalie in East Helena, Montana

I have no idea why your Eddie Bauer order came to my house in Maine.

My 8 year old almost opened it for you, but fortunately I found her before she succeeded.

I've always wanted to see Montana. Perhaps I will deliver your order in person.
Posted by matryoshka at 8:43 PM 1 comment:

Jupiter in a great space 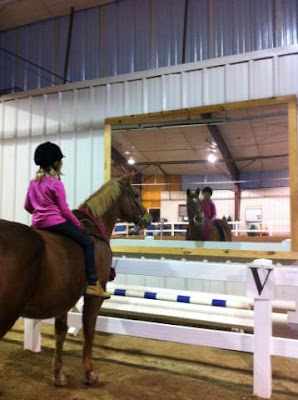 On Saturday the riding instructor remarked about how Jupiter was in such a great space that day. Articulate. Tuned in.

She hadn't had school for a week. And we had time for lots of snuggle time.

And now...that space is done.

Guess what? Her homework is not done. Oh well, her parent teacher conference is tomorrow. I am still conflicted about homework because I think she that academically she is more than capable of doing the homework and should be held accountable for doing it. And then there's the part of me that hates the struggle we have most nights doing it. For awhile we sat together on the couch so she could lean on me physically while doing the homework. That seemed to help. But tonight, no such luck. She wouldn't go to sleep last night and was up before 5am rocking and chanting, so she was tired by the time we got home at 4:45. On the upside, she did take a shower, so at least she'll be clean tomorrow.

The pick up people remarked today how much the MP3 player helps her after school; with its eclectic mix of music. It always reminds me of putting a cover over a bird cage.

Last year her school issues seemed primarily teacher related. This year, she's coming home with stories of this, that or the other kid said something mean. A girl in a different second grade class is trying to make Jupiter's "best" friend play with only her and leave Jupiter out. Someone last week said they didn't like Jupiter's name. (Her real name; not her blogname). I don't remember her being this focused on other kids being mean before. So I'm not sure if this is a new thing or just increased awareness. I'm not sure if the other kids are mean to many other kids as well as Jupiter. Sometimes she doesn't even know who the other kid is. I'm not sure how much the other kids are being mean and how much is Jupiter's interpretation of their interactions. I think it's only a few kids; but those are the interactions Jupiter seems focused on at the moment.

She did say today that two of the boys at her table got moved so now she's at a table with only girls, and she likes that. That one boy accross the table kept kicking her (just absent kicking while sitting, I think; not kicking with intent to hurt) and that was making her really mad. She's handling all this okay at school (with the exception of the one day she sat at her desk and cut her own hair). But it's making for some interesting evenings.

Conference tomorrow. I get to have a one on one meeting at work with the senior manager from NJ tomorrow afternoon; then go pick up Jupiter and go to her parent teacher conference. I'm not sure I'm a fan of "bring your child to the conference". There are times that makes it difficult to discuss what I really want to discuss. That happens to be open house night for art, music and phys ed teachers; as well as guidance and social work. I want to see the art teacher. Jupiter has really been enjoying art this year. And it's also book fair night.

Remind me to pack snacks.
Posted by matryoshka at 7:18 PM No comments:

I have vacation time scheduled for the last week of December. The week between Christmas and New Year's, to be exact.

Mostly I did that because the only way I could get the day after Christmas off was to take the whole week.

Then I tempted fate. I actually realized how busy life has been and how much busier it will get during the rush of December Madness and pre holiday anxiety triggered behaviors. And I said to myself, "Wow. I can't wait for that week between Christmas and New Years when we can stay home and do absolutely nothing."

And the PTO gods laughed hysterically.

In October, I took one hour the second week of the month. The compliance area held a regional town hall meeting a couple of towns over from the town where I work (which is a few towns over from where I live). The town hall meeting was scheduled for the middle of the day. Unfortunately it was Thursday; which at the time meant dance class and karate. Deliberately scheduled for the same day since they occur near each other, and not so near to wear we live. Which meant that Thursday's schedule was going to go something like this.

So I took an hour of PTO after the meeting and went directly from Meetingtown to Dancetown. It just made sense. And Meetingtown happens to be Famous Outlet Store Town.

Two weeks later, Jupiter was having an extremely moody phase. I arrived to pick her up and she was throwing a giant wango tango; so I decided that she was not going back to after school care for the rest of the week. Wednesday is a half day of school in Hometown, so that was another 2 1/2 hours of PTO. I had scheduled the following Friday off anyway, so that was another 8 hours.

Then came late Sunday night. Jupiter woke up with a sore throat/headache. I let her sleep late in the morning, and when she woke up she said she could go to school. 1.5 hours of PTO.

Had to stay home sick the next day too. 8 more hours.

Now it's a new month. I was going to work all day every day. Until Thanksgiving.

At 11:30 the nurse called. Jupiter's orthdontic appliance had come loose and she couldn't close her mouth all the way. Called the orthodontist. Made an appointment. Left work early again. 1.5 hours.

My vacation is slipping away.

Fortunately I had a whole lot of PTO left over from last year. And I am now well into that time.

Hoping I can save the rest of it.
Posted by matryoshka at 7:00 PM 1 comment: