Autumn Leaf and the Vet

On Monday Autumn had to go to the vet. Over the weekend she was making constant trips to the litterbox, resulting in little bitty pee clumps. This cat can literally pee and poop like a dog, so I know this is not normal. From my own personal experience with UTI's, I diagnose the cat as having one and Monday afternoon we went to the vet.

Apparently everyone's pet was sick on Monday. I waited in line for 10 minutes just to tell them she was there. Then we waited. Then the vet tech brought us in the room. We waited some more. The vet came in, checked her out, and brought her out back to get a urine sample. It tested positive.

The vet offered me an option of an antibiotic injection which would be good for two weeks worth of antibiotic. It was about $10 more than the standard fight with the cat twice a day version. Totally worth it.

If only I could get the pediatrician to do that.
Posted by matryoshka at 7:45 PM 2 comments:

Jupiter has a new routine I am not taking kindly too.

It used to be that we would do our bedtime routine, read three picture books, say goodnight, turn on her music (very very loud to drown out all other stimuli), and she would rock until she fell asleep. It worked. She went to sleep.

Now, over the last few weeks, it's been: "The problem is, I just can't go to sleep." For hours. After 2 and a half hours a couple Saturdays ago, when she left her bed and climbed into mine just shy of 9pm, I grabbed a children's book off the shelf in my room. (as opposed to the library downstairs.) The book is called Happy Days on the Farm and was published in I think 1941. It came with the house, but I always used to read it when I came to visit and so it's still here. Quick synopsis, Ronnie and Ruthie are twins who live in the city with their parents, but wish they could go visit their grandparent's farm. So one day their father comes home and announces that he and their mother are going to take a trip to South America and will be gone for several months. The next day, their grandfather picks them up, they go to the farm, and the parents go to South America for several months. It never does mention why the parents went off to South America for several months. I've been very curious about that. Anyway, we read Happy Days on the Farm until 9:52 when she finally fell asleep. In my bed. Where she slept happily all night. Kicked me a lot too, but at least it was accidental for a change.

Last night it was the thunder. She also had a nap yesterday afternoon, from sheer exhaustion. We read four chapters of Little House in the Highlands until I lost my voice. Eventually I fell asleep, and she fell asleep at some point after that. The problem is not that she is not tired. She is EX. HAUST. ED. (as am I.) Right now, instead of going to sleep, she's sitting on her bed in a pile of toy horses. One night that worked. She played in her room by herself and finally bored herself to sleep.

Weather? It's actually turned warm and humid this week. She hates heat and humidity. Lack of routine in the summertime? She's just so overtired at this point she can't turn off? I don't know what to try at this point. But there MUST. BE. SOMETHING.

I would keep her up later, but her evening behavior has been atrocious. Totally incapable of making good choices. Tonight she was totally disrespectful while she was in the shower, so when she got out of the shower I handed her her nightclothes and her pull up and told her she could get herself ready, since she wasn't treating me nicely. She threw the pj's and pull up across the room and demanded that I help her. I told her that I could not help that voice, and that she could choose between getting herself ready and going to bed wet and naked if that was how she was going to speak to me. She demanded about 20 more times, finally managed a nice voice. We went back in the bathroom. She got angry because the pull up she threw was now in the still damp tub, and wanted me to get her another one. I'm sorry. It's wet because you made the choice to throw it and that's where it landed. So you can't have a different pull up tonight. You'll have to wear that one. She didn't like that either. And so on..and so on. She did actually settle down enough to have her three picture books. We said goodnight, I turned on the music, and 20 minutes later the rigamarole started. She can't rock because she's too tired. (so go to sleep!! ) She just can't go to sleep.

She's still playing with the horses.

Two weeks of vacation start tomorrow. In less than 24 hours. We'll have 16 days to beat this thing.

down dog at the beach 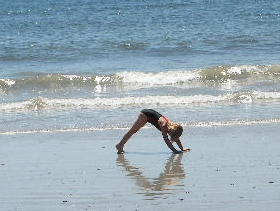 Posted by matryoshka at 6:50 PM No comments:

the real story behind the picture 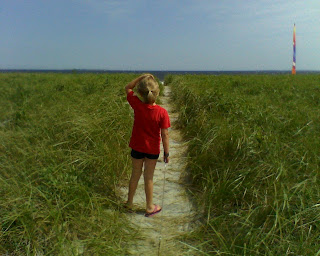 I forgot I had this picture on my cell phone from the first trip to the ocean this year.

Looks beautiful, doesn't it? The picture doesn't really show the 22 mph wind and ensuing wind chill factor. It wasn't nearly as warm as the picture looks. Pretty darn chilly, in fact. I froze. Jupiter had no complaints about being cold. I had to bribe her off the beach by offering to go to the pier and get a slice of Bill's Pizza.

Probably why I managed to get a parking spot that day. As we walked through the dunes, Jupiter stopped to survey the ocean, and I saw the colors of the grass and the water and the sail and Jupiter's boogie board, and had to whip out my phone and take a picture.

Oh yeah, the boogie board. I was in such a hurry I didn't actually GET the boogie board in the picture. Imagine the multicolored boogie board at the end of the black string. That was the photo composition in my head. This is what I pulled off. She's not generally receptive to posing for a retake. I did manage to get her to redo a down dog pose on the beach last Sunday, but I had to deal a snack bag of chips for it.

For those of you whose lives are impacted in any way by adoption, Tubaville is looking for your thoughts. There are prizes!!

Thanks!
Posted by matryoshka at 8:04 PM No comments:

the amazing properties of the ocean 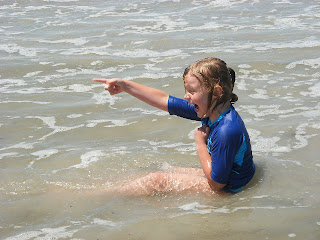 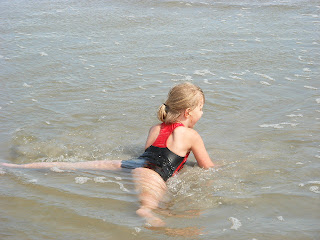 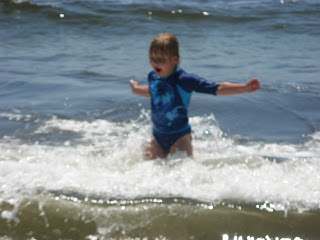 You should hear her happy shriek 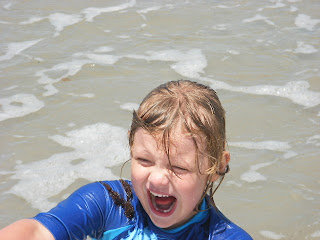 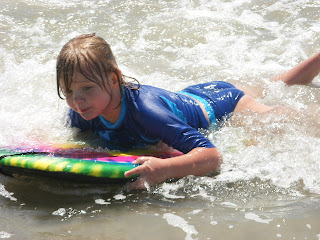 Gonna be a surfer!


We have FINALLY made it to the ocean. Saturday we were pushing it a little bit, since the wind was blowing about 22 miles per hour. It was a little cold, unless you happened to be Jupiter, in which case you found it exilarating and thrilling. Jupiter wanted to go to the lake instead, but when we got to the ocean she was thrilled by all the sand, and then the waves! She stood in the water and laid in the water and let the waves rhythmically crash into her over and over and over. Sensory input, anyone? And she came home like a different kid. All morning Saturday she was prickly and arguing about every little thing.

Sunday Jupiter was polite, kind and undemanding. All day. She gave me two compliments and I didn't even have to hint for them. We didn't have to do any behavior managing ALL DAY. We also went back to the ocean, since the state park pass which travels with Jupiter over the summer happened to not be in residence. So I had to cough up $10 to park in the municipal lot (better not hear anything about the city of Scarborough's budget not balancing) when there was no free street parking. And it wasn't even windy and cold. She crashed in the waves some more and layered herself in wet sand, then rinsed it off, then rolled around in the dry sand so she could go rinse that off. Oh yes. We saw a dead seagull washed up on the beach. We saw its bones. That was one of her favorite parts :)

I want to live at the ocean some days. This coming Sunday has potential to be another beach day.
Posted by matryoshka at 6:28 PM No comments:

I THINK it's a compliment

On Monday I dropped Jupiter off before going to work. While we were at the front door doing the Goodbye Ritual (knock on the door five times, then two times, wave through the little window in the door, then wave when I get in the car, and flash the lights while backing down the driveway and avoiding the trees at the end of the driveway.) she said, "Mom. Your earrings are pretty."


"Thanks! That's so nice of you to say!" (trying to emphasize this.)