I cleaned my desk at work today.

Typically I'm so busy working as fast as humanly possible, I don't notice everything on my desk.  This is a relatively slow week; so I cleared the drawers and desk top and confidentially destructed a zillion pieces of paper.

And the sheer number of calendars was revealed.

My desk calendar tracks the work meetings, appointments, birthdays, and activities; and the dates my numerous passwords get changed.

My regular monthly calender serves to track my PTO and if I just need to know what day of the week a particular date fell on.

So I thought for awhile about how that was just TOO.  MANY. CALENDARS.

Then I added a bunch of appointments and meetings to the email calendar.

Then about an hour later I saw the Baby Blues Page a Day Calendar.  That one serves no function other than to make me laugh because my life shows up in the pages so very often.


When I got home, Jupiter and I had to go through the hot lunch menu calendar.  She hasn't touched a hot lunch since kindergarten, until about two weeks ago.  Now she's all about the hot lunch.  So we had to post that on the fridge.

Which reminds me, I forgot to reset Jupiter's magnetic perpetual calendar for the new month.
Posted by matryoshka at 8:50 PM 1 comment:

I love when my kitchen is actively cooking but I am not actively in it.

The yogurt machine is incubating.

Dried chickpeas are boiling away on the stove so I can freeze them to use for recipes.  I read somewhere (actually I think many somewheres) about how its cheaper to boil up the dried ones and freeze them; than to buy the cans all the time.  Plus you don't get the BPA from the cans in the food.  I bought the dried chickpeas a month ago, but hadn't gotten around to boiling them up yet, and finally ran out of canned chickpeas to work with.

The bread dough is NOT rising, because I forgot to buy flour yesterday to make soudough bread.  I love the recipe, but it's very flour intensive.  But never fear, soon enough we will be making some pizza crust to rise for  Sunday supper pizza.  Not sourdough crust though.  Jupiter will eat homemade pizza if I make Plain Pizza Crust, so that's what we make.  Added olive oil makes everything better though.

A few weeks ago it was Mango week.  Last spring I happened to be in WFM one day, when they were handing out mango samples so we jumped right in line.  And it turned out they were Champagne mangos.  I've also seen them called yellow mangos or some other name which probably references where they are grown, but I can't remember exactly what it is.  They were totally sweeter and not stringy or fibrous and it was the most delicious mango I had ever eaten, so I bought and ate bunches of them.  Even Jupiter ate them last year. Then the season ended, and I waited and waited and waited for spring to come again so I could buy more of them.

Finally Mango Week rolled around again.  This year I bought a whole case of them; on a Tuesday after swim class.

By Sunday morning they were still in the case, moving quickly beyond the ripe stage.

Thus began the day of "active cooking".  By 7am, I was up and scalding milk for the new yogurt, straining the whey out of the last of the old yogurt and cutting up 17 mangos.  Also had to cut up a pineapple for Jupiter because during our last visit to WFM, the sample was fresh pineapple and Jupiter tried it and liked it.

Odd how if I hand her something and tell her to try it she won't, but if store person hands her something to try she will.  But it's a healthy choice, so whatver workds.

By 9am the yogurt was incubating and I had made 8 jars of mango freezer jam, and put the rest of the mango cubes into bags in the freezer. Finished straining the old batch of yogurt, and put away the cut up pineapple in the fridge.  It feels like I made something else that day too, but I don't remember what it happened to be.  It might have been the loads of laundry in between the fruit and yogurt processing. 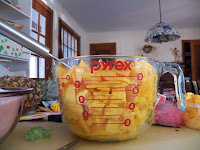 Then we went to church. 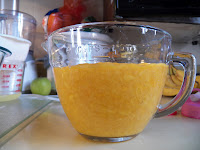 Jupiter does not want me to post the picture of her stirring the sugar into the mango.

So this picture is not actually in MAINE: so it's a little inconsistent given the title of the blog.  (Jupiter is not the only one becoming more literal.  I suspect it is contagious).  But I took the picture yesterday before I realized that Jupiter was looking out towards Logan airport.

That's where our connecting flight from Moscow via Frankfurt landed; and consequently; the place of Jupiter's arrival on US soil and the conferrance of US citizenship to her.  Although, since I was holding her the whole time; her feet technically did not touch the ground there (literal).  So the picture has its place.

I explained to her that's where we landed when we came home from Russia, and she said, "Oh cool.  Can we keep going now?"

But I got to take the picture first.
Posted by matryoshka at 10:24 PM No comments:

No, Maine has NOT fallen off the face of the Earth.  Not that one could tell from my prolific blog posts or anything.  We are, in fact, still here.  And even with three extra days off this week, and having the chance to catch up on a great many things, I still have not caught up with everything.  I suspect that ever being caught up with everything is a state that exists only in my imagination.

Life is not boring.  That is for sure and absolute certain.

Even now I am multitasking; uploading 75 photos to Shutterfly while I compose this. Don't ask how many photos I have left to upload to Shutterfly. I couldn't even begin to estimate that number.  I finally got my new camera (thanks to a great Amaz*n sale and gift cards I got for my birthday).  There are only two problems with the camera.  While excellent for photography; and capable of performing a great many functions I don't know how to make it do, it's not good for say, bringing along snow tubing.  Also; I have great difficulty in remembering to remove the lens cap before pushing the power button.  I wonder how many times I can get away with that before the camera breaks.

My last post was titled :Vegan Lent.  Shortly after I posted about Vegan Lent, Vegan Lent was brought to a premature end by Virulent Virus; which hit me like a truck on a Tuesday morning and literally dropped me to the floor.  Note: they really really hate it when you pass out at work. They also failed to belive me when I tried to convince them from the bathroom floor that I was "just resting".  As a result of the Virulent Virus; I could only consume rice crackers and chicken noodle soup.

No worries: no permanent damage was caused by the virus.  Large amounts of paper and mail did result; since they had to file an incident report with the insurance company in the event I needed workmen's compensation.  They sent me a copy of the incident report in the mail ( I take issue with the phrasing "Employee was found passed out in the bathroom".  I was not in any way, intoxicated.).  A copy of the incident report was followed in short order by a mileage sheet to submit in the event I had to travel to receive treatment for my workplace injury, and in a seperate mailing, an insurance card to cover any prescription medicines required due to said injury.  These mailings were subsequently followed by a mailing indicating the non coverage of my workplace injury as it was caused by a non work related condition.

But wait, there's more.  After that, I recieved a call and email that I had to sign and return a dependency form because I had missed more than 24 hours of work, even though the claim was denied.

I suspect logic such as this is directly related to the high incidence of insurance fraud.

Listening to BOOMING in the woods behind my house right now.  I'm so glad we've the governer has legalized fireworks now.  The ground is super dry, so I hope they are literally shooting off the fireworks IN the river.

While I was recovering from the flu, I had Jupiter's parent teacher conference.  She tells me that Jupiter is kind and compassionate.  I'm glad she is kind and compassionate at school.  Although it is generally me with whom she has no interest in being kind or compassionate.  She is able to read above grade level.  However, in my experience, she has problems answering open ended questions about material she has read.  Multiple choice is fine.  But short answer questions; she doesn't know what to do with.  Which was clearly illustrated to me one night when she read a passage about bears and what they did over a year.  The first question asked: "How was winter different from summer and fall?".  And Jupiter very reasonably asked: "Why are they asking about seasons?  The story was about bears."  Some nights I think I should shoot videos of homework time to show the school staff.  During the conference, the sample reading paper asked "How was Sam's new house the same as his old house?"  Jupiter answered "Both houses have bushes in front and a big yard."  She only got partial credit because she was supposed to answer that he had a friend that lived near his old house and a new friend at his new house.  But the question didn't ask anything about friends, so she didn't tell them anything about friends.  She's literal.  If anything, she's becoming more literal. Also: she can't focus on sheet full of math facts and complete it in the time allotted to meet the state standard for 2nd grade.  Which is not a suprise for me.  Most days, she can't go in the bathroom and complete brushing her teeth without getting distracted by a toy, a water faucet, a washcloth, or a combination of any or all of those things.  And honestly, what's  important for me that she is capable of adding and subtracting.  She understands the concept and can perform it.  Not that she can do 50 facts in five minutes or whatever the standard is.  (I'm a little quite hostile towards the state standard).

We discussed these a week later at her 504 plan meeting. ( I also asked if they knew a place I could order unbreakable pencils).  Jupiter's teacher presented a list of accomdations she should have for next year.  They didn't take anything away.  It was excellent.  The next week, I emailed the coordinator to ask for homework accomodations because I forgot to ask for them in the meeting.  I remembered when we were in the car on the way home from swimming and I was asking Jupiter her math homework questions in the car on the way home because it's so much easier  than getting her to actually WRITE down the answers.  She emailed me back and said "absolutely."

That same week, Jupiter went on a field trip (to the Art Museum) without a family member.

WHOOHOOOOOOOO!!!!!  Okay, so she completely rocked and banged against the backseat of the car everytime she was in it.  But she went on the field trip.

Tomorrow is supposed to rain, so I can't build garden beds out of cement blocks or hack out bushes with a hacksaw.  So maybe I can post two days in a row.