Life in an extrasensory world

This means that every time she rides in the car, she leans backwards and forwards, banging her back end against the back seat of the car.  Over. and Over. and Over.  Typically accompainied by a repetitive chant, but sometimes actual singing with words.  Often hard enough to make the car move back and forth on the struts while we're stopped at a red light.

I know there's a fancy name for this type of sensory input.  I know Heidi the Goddess of Therapeutic Riding Instructors could tell me what it is.  I don't keep track of the fancy names.  I just call it sensory seeking.

She gave it up about a year and a half ago, just deciding one day that she wasn't going to do that any more.  Honestly, I had gotten to the point where it was just what she did and I mostly didn't notice that she was rocking and chanting.  (Until I got the bill for replacement struts.  Just kidding.  I didn't have to buy new struts.  Although I did have to replace the whole car, come to think of it.  Although I suspect that wasn't entirely wrought by one sensory seeking child).  However, it tended to bother anybody else who rode in the car, who couldn't fathom why I would just keep driving and/or having a conversation while Jupiter was rocking away in the backseat.  If I stopped the car every time she rocked, I would be permanently stuck about three years ago.

Hopefully if I was permanently stuck, it would be during the summer.

Now I notice it again.  She was sneaking it in here and there, and finally came out one day and asked if it was okay if she rocked in the car again.  I said "Sure!" Whatever you need to settle yourself that doesn't hurt yourself or anybody else is okay with me.

Her anxiety must be up again.  Despite the 504 plan, I don't think the school really has any concept of how much being in the classroom all day really takes out of her.  On the upside she's not coming home with a plethora of things which are not hers.  So if she's rocking again instead, it's totally a fair trade.

She's had a cold and when she has a cold her nose runs by the gallon, so we haven't been able to attend any open swims lately.  During summer she swims mostly every day which really helps with the sensory seeking.  She really misses it during the winter.

She has swim class tomorrow.  We have a new Lycra swim cap to try out.  Her hair is long enough that she really should be wearing a swim cap.  Week 1 of the new session she had a purple silicone cap.  It ripped while we were putting it on.  So much for that.

Last week, she had a pink and yellow silicone cap.  We actually got it on her head.

She was in tears before she even got in the pool.  It covered up her ears and essentially amplified all the pool noise.  Which is quite noisy at that time of day.  While she was in her lesson, I tried on her cap to try to get her perspective on things.  It was, in fact, louder and disorienting.  Plus the silicone caps are prone to pulling hair as well.  Apparently I should have read the product reviews BEFORE ordering the product.

Ah, the irony of sensory issues.  Some things you need more of, and some things you need LESS of.  Like noise.  And smell.  But not taste.  Ironic, isn't it?  She hates strong smells but loves strong tastes. One would think those two would be the same, one way or the other.

So tomorrow, we're going with the Lycra.  The product reviews indicate that it doesn't pull hair.  We tried it on and the noise doesn't seem to be louder with it on.

I have a pink and yellow silicone swim cap up for grabs.  I guess unless I start swimming laps.  Which I should.  But I need swim goggles that do. not. leak. because of my contact lenses.  Never had much luck there.

Sometimes she extrasensory world requires trial and error to find what works.  Which is never boring.

I don't know how I functioned before I found out all about this sensory stuff.  It's really fascinating.  I could go on all day.  Which would make for a very rambly post.

Which it may be already.
Posted by matryoshka at 7:24 PM 3 comments:

In the car on the way home, Jupiter and I were discussing "Her Day."  She's better at this type of conversation when she's in the backseat and I'm in the front seat, so this is typical.  I asked how her day was and she said "Good."  Which she always says.  "Only one yellow slip".

"Oh, were you talking when you weren't supposed to?"

"Oh-kay.  Guess I need a little context to go with that."

(Enter a discussion about what context means.  But it's not relevant to the post, so I will not include it here).

She was trying to be defiant, more likely. It just comes natrually.  But I just had this vision of her in the classroom, waiting for five seconds after Mrs. R said No More Talking, and then coming out with "MEEP!"

I laughed hysterically in the car until we were halfway home.

I'm sure these yellow slips aren't working out the way Mrs. R expects them too.  We went to the conference and Mrs. R asked Jupiter to explain to me the pile of yellow slips she'd received in the classroom over the previous few weeks.  For talking, for the most part. I can't get that bothered about her talking once a day in the classroom.  But at least I didn't laugh my head off at the conference.

I just know Juipter is going to go back to school on Tuesday and come right out and tell Mrs. R that I thought it was funny that she got a yellow slip.

Jupiter's Hair when it Looks Neat 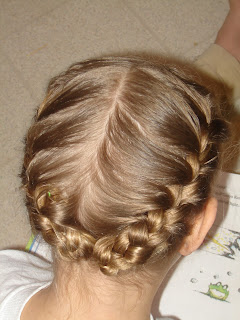 Her hair can look neat.  But she hates it when I braid it.  It's not stylish enough, I guess.  So I fight the hair battle on select occasions.  Ironically, I fight it more at night because keeping her hair braided at night lessens the amount of rats nest detangling we have to do in the morning. Although for evening braiding we don't go all out with the pinned up braid princess look.
Posted by matryoshka at 2:55 PM 3 comments:

I was going to call this C*R Talk, but I believe that name is already taken.

With any luck, I will remember this conversation verbatim.  Or close to it.

Tonight we were driving home from swim class (anybody else out there who spends 80 minutes driving in the car for a 30 minute swimming lesson?  Yeah, just me.  Thought so.) and the conversation turned to imagination.

Jupiter:  "I have a good imagination.  I want to keep it."

Me:  Yes, you do.  I am not very imaginative.  But I have other good qualities."

Ouch.  When I picked my head up off the steering wheel, I asked her if she could think of any.  "Willing to drive 80 minutes in the car for a 30 minute swimming lesson" comes to mind.  Just saying.

She is not innacurate.  Although I'm not sure it's one of my BEST qualities.

I am, however, pleased that she can use adverbs properly in spoken English.
Posted by matryoshka at 7:40 PM 1 comment: